In 1942 following the success of the naval Sea forts of the Thames Estuary, Civil Engineer, Guy Maunsell was asked to produce a solution for the Army offshore anti-aircraft defences.
He produced a design comprising of seven separate fortresses positioned in clusters and interconnected with walkways, this replicated the anti-aircraft battery as utilised on land.
They were constructed at the Red Lion Wharf site, Gravesend.Kent.
These Forts were named:
The Nore Army Sea Fort midway between Sheerness and Shoeburyness 1943.
The Red Sand Army Sea Fort, 6 miles off Minster, Isle of Sheppey 1943.
Shivering Sand Army Sea Fort, 7 miles off Herne Bay 1943.

Each Fort was made up of 4 x 3.7ins Mk2C gun towers, a single Bofors light anti-aircraft tower, a searchlight tower and a control tower all inter-connected by walkways.
From top to bottom they stood 117 ft tall.
The base of the Tower consisted of 4 hollow reinforced concrete members, 85ft long and 6ft high, the floor sides and roof sections were 5ins thick. The weight of each base was 300 tons.
The legs were also reinforced concrete, cylindrical and 65ft high, 3ft diameter and cast in 3 sections. A concrete cap 4ft deep and 14ft square with a 6ft diameter hole in the centre, formed the base for the steel superstructure.
An octagonal steel house forming the superstructure of the tower contained 3 floors. The walls were made from .25inch steel plate. Armoured parapets were provided around the top deck and the magazine chambers.
Five of the 7 seven towers forming each Fort carried mooring facilities for ships and every tower had its own central heating system and a boiler, the walls were insulated with hardboard lining and the floors a .75ins thick covering of asphalt. The top deck was armour plate.
Each Fort had 165 officers and men doing a 6 week duty.
The number of aircraft shot down by all the Forts combined was 22 and approx. 30 flying bombs were destroyed.
At the end of the war all Forts were placed into care and maintenance.

In 1950 following the outbreak of the Korean War the Forts were refurbished and new updated equipment installed. A scheme to build and locate another 150 Army Towers around the coast was planned and then scrapped.
In 1956 the Government decided they had no further use for the Forts and they were abandoned to the elements.

The Nore Fort was removed in 1959 following the collision of the ‘Baalbeck’ and the loss of 2 towers and 4 civilians from Whitstable and Herne Bay in March 1953 .
The Shivering Sand Fort lost a gun tower in 1963 being knocked over by the ‘Ribersborg’, a cargo ship.

In 1964 ‘Screaming Lord Sutch’ decided to set up a rival radio station to Radio Caroline on the Shivering Sand Fort and within a week there was a mad scramble to set up radio stations on all the Forts.
The passing of a Bill in August 1967 made broadcasting illegal and the Forts fell into dis-use.
In the 1970’s all the remaining walkways were removed. 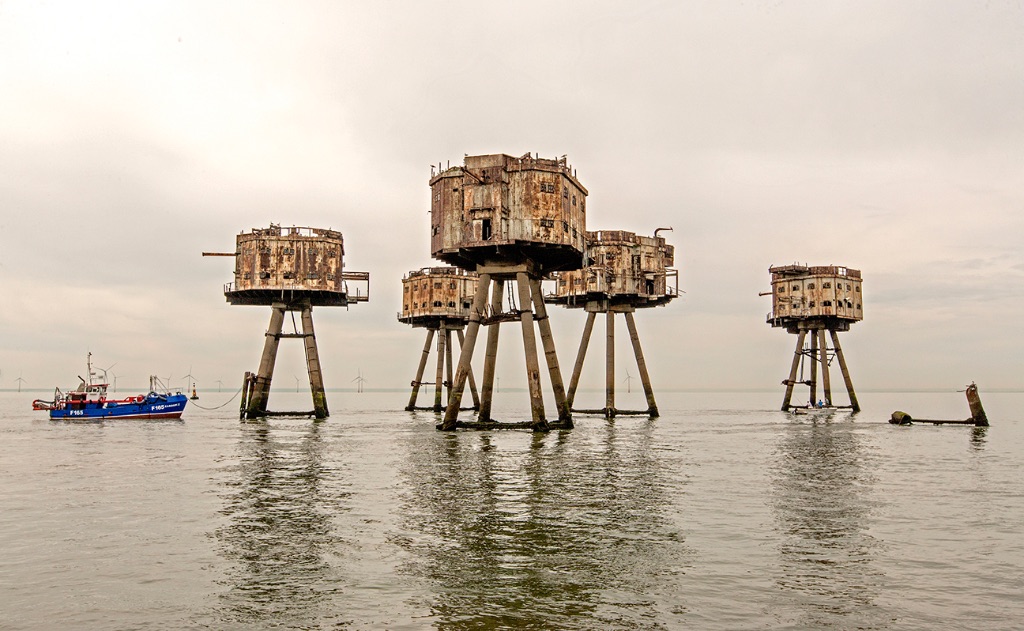