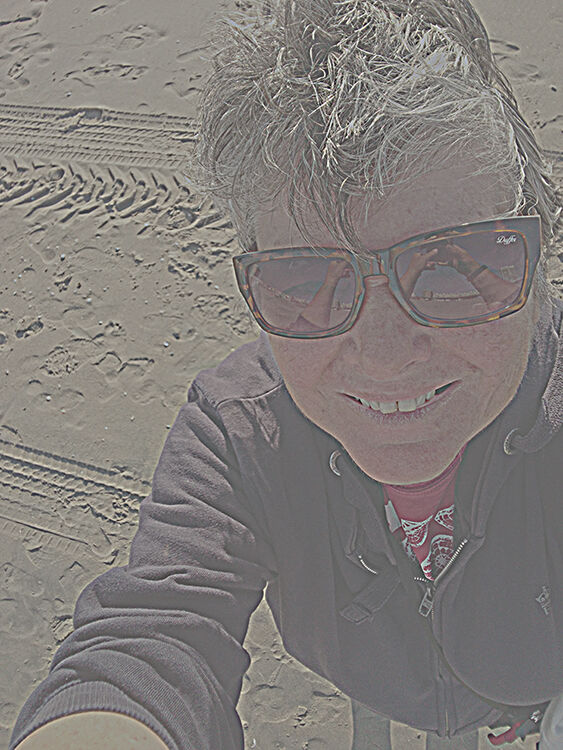 I am an artist who uses a camera.

Encouraged by Landscape photographer, Fay Godwin I gained a BA Hons in Visual Communication at KIAD and graduated with a greater understanding of conceptual thinking and how the camera can be more than simply a light box. Technically self taught and learning day by day and discovering the magical affect of light dancing upon the lens and its connection to heart and mind.

Living in Whitstable, on the North Kent coast, the sea and the shoreline are my constant inspiration

Drawing upon events in my life, spirituality and places visited, my photography has also found expression through digital collage. We all have complex family relationships which are appreciated and better understood as the years pass.
My mother is Dutch and together with her mother, my Oma their war years were spent in three Japanese Concentration camps in Indonesia.
My Opa was captured whilst serving in the Dutch army, first a prisoner in Singapore helping construct Changi airstrip and then a worker in the steel mines, Kawasaki in Japan.

Unbelievably they all survived the war and were reunited before returning to the Netherlands only to find that all the members of Oma's family had been eliminated in the Concentration camps in Sobibor, Poland and Auschwitz..they were Jewish.

My father meanwhile lived in Birchington, Kent and would chase damaged enemy aircraft across the fields hoping to find chocolate - the pilots always had some, he told me. As a boy he rode many times to Reculver with his little brother on the handlebars, here he watched the Dam Buster trials of the bouncing bomb in Reculver and the illuminated skies when the Seaforts fired upon enemy aircraft.

My parents met soon after the war when Dad joined the RAF [he lied about his age] and Mum who had missed all her schooling years was training as a TB nurse ..................

This and my every day influences my work, how I see the world and how much I appreciate love. I have lived in many places in many countries but Whitstable is now my home.

My work is for sale in HUT 15 at The Harbour Market, South Quay, Whitstable Harbour CT5 1AB and during the winter months I will be open Friday to Monday 10.00 - 4.00pm weather permitting.

You can email me : suecarfrae27@gmail.com

Thank you for your wonderful comments and kindness when visiting my Hut in Whitstable.
Next
Previous